Aim High Reach for the Sky!

Roade Primary School has a long and proud history. The following is an extract taken from British History on Line and charts the development of the school from it's early origins in 1836, to the building of our original Victorian building in 1876 up to the 1970's. The school has continued to prosper and grow and the latest additions to the school site sees the addition of the 2016 extension that will enable the school to grow to accommodate 420 pupils. We are a very modern school with a very proud history. 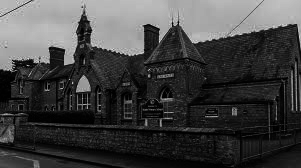 There was no day school in Roade in either 1818, when the children of the parish were said to be eligible to attend the endowed school at Courteenhall, about a mile away, or 1833. By 1840 one had been established by the Baptists (in addition to their Sunday school) but it appears to have been shortlived.

In 1836 an 'infant and sewing' school was opened, supported principally by the wife of the rector of Courteenhall, from which a fully-fledged church school developed in 1849, when the Northamptonshire branch of the National Society admitted the school (presumably then recently opened) into union and gave permission for the master to be trained at its central school in Northampton. The society made an annual grant of £2 in the 1850s, rising to £3 in the 1860s, and also helped a night school. The latter had ceased by 1867, when the day school had an average attendance of 40, taught by a single mistress. In 1870 an average of 34 children aged between five and twelve were attending, together with four older children. The staff consisted of a mistress and monitors. The school, which was under diocesan inspection, had an income of £6 from Betton's Charity, £38 15s. 4d. from voluntary subscriptions, and £12 from school pence. The night school had been revived, on two evenings a week between November and March, and was attended by 19 pupils aged between 12 and 21, who were taught by the vicar (who provided the funds) and the day school mistress. The schoolroom was rented, rather than the property of the church.

The Education Department calculated that 114 places were needed to meet the requirements of the 1870 Act, of which the existing school could provide 82, although its premises were poor and a new building was desirable. The Department therefore issued notices for all 114 places, whereupon the vestry resolved in favour of a school board, which was set up in January 1876. Thomas How, the Baptist minister, was one of the original members and later chairman. The two Nonconformist congregations in the village collected £70 towards the cost of the new school, which was opened in 1876 on a site in Hartwell Road bought from the Grafton estate. The buildings included a schoolroom and a master's house, linked by a single-storey board room. In 1893 the estate gave a strip of land adjoining the existing site to the south and east, which enabled the premises to be extended to accommodate 100 infants and 100 older children. The National school in Church End was closed and converted into two cottages.

In 1879 the board appointed James Elden as headmaster, who remained at Roade until his retirement in 1922, assisted until her death in 1912 by his wife, who taught the infants. At least in his earlier years, he also taught an evening class. In the 1890s and 1900s Elden was paid £100 a year and his wife £80; his salary was raised to £120 in 1908. Throughout his headship Elden received consistently good and often excellent reports from H.M.I. When the county council took over in 1903 the school had about 140 pupils. The infants were taught by Mrs. Elden and one assistant, while her husband had three assistants for the older children. A school garden was established in 1907, a woodwork class in 1911, and cookery in 1917. The buildings were renovated in 1919 but the managers failed to persuade the L.E.A. to convert the privies to water closets.

Elden was succeeded in 1922 by R. W. Janes. New lavatories were finally installed in 1923, electric light in 1926, and hot water radiators in 1930. Despite the transfer of children at 11 from Ashton in 1924, the number of pupils at Roade remained around 140 throughout Janes's time. As well as winning a county schools gardening competition virtually every year, pupils competed successfully in music festivals in Northampton and, after the head bought a wireless in 1925, essay competitions run by the B.B.C. A sample of needlework displayed at the Imperial Exhibition in 1923 was later sent to India, the school's gardening syllabus served as a model for a similar course in Southern Rhodesia, and in 1927 the head gave evidence to a departmental committee on the training of teachers for rural schools. In 1925 the Wesleyan schoolroom across the road was leased as a practical instruction centre, at which the older boys were taught woodwork and the girls cookery; the kitchen was also used to provide dinners. A parents' open day was started in 1924 and in 1933 Janes organised what he described as the school's first annual educational outing, when 150 children, parents and friends visited Fry's chocolate factory and other attractions in Bristol. From 1926 the head took responsibility for a county branch library at the school. His successor established an annual sports day in 1934.

In 1939 a hundred London children were evacuated to Roade. Initially they and the local children were taught half-time in shifts; later every available hall in the village, as well as a room at the George Inn, was hired to accommodate classes made up from both sets of children. Another consequence of the Second World War, in which the Pianoforte Supplies factory greatly expanded, was the creation of a nursery class  to free more women to enter the labour force.

Most of the evacuees gradually returned home, so that by 1944 all the children were being taught at the school itself. At the end of the war Roade had about 80 pupils but faced the prospect of a rapid increase as a result of the raising of the school leaving age, the transfer of children at 11 from adjoining villages, and the building of large numbers of council houses. The managers' difficulties were aggravated by the poor condition of the buildings and a shortage of staff, which led to the temporary closure of the domestic science centre in 1946-7. Although the first post-war report from H.M.I. was good, the managers were aware of uneasiness in the village at standards in the school.

Numbers rose from 150 to 200 between 1951 and 1954, resulting in class sizes approaching 40 and the use of a newly opened canteen as a classroom. Staff shortages also continued. The managers resisted pressure from the L.E.A. to take children over 11 from Hartwell, or to transfer the two top junior classes (as well as 11-year-olds) from Ashton, even if a teacher came with them. Pressure eased somewhat with the opening in September 1956 of the secondary modern school, but even after reorganisation the primary school still had nearly 200 pupils and a staff of a head plus four assistants. The Methodist schoolroom was given up after the senior pupils left; at the school itself a cookery centre built after the war was turned into a classroom, and the conversion of the former board room at last gave the school a staffroom. But there was still no assembly hall, and in 1962, with further large-scale housing schemes planned, the L.E.A. indicated that it intended to enlarge and remodel the school on its existing site. Two years later the authority announced a complete rebuilding in two phases, after which the old buildings would be demolished, so as to give the school between eight and 10 classrooms, an assembly hall and indoor lavatories. In March 1965 the contractors were asked to start the work without delay.